Israel has published a list of organisations supporting a boycott campaign against the country, whose activists will be banned from entering the Jewish state.

Members of 20 groups which back the Boycott, Divestment and Sanctions (BDS) movement will be denied entry visas and residency rights under a controversial law.

Gary Spedding, a British cross-party consultant on Israel and the Palestinian Territories, told The Independent the blacklist was merely an excuse to legally justify barring activists and human rights observers from entering the country.

Iraqi protesters vow to continue regardless of government offers

“Israel’s publishing of a ‘BDS blacklist’ is the latest example of just how fragile the regime actually is and demonstrates a hypersensitivity to legitimate criticisms made of the state’s actions and policies vis-a-vis the Palestinians,” Mr Spedding, who was refused entry to Israel in 2014, said.

“This isn’t really about targeting BDS activists. It’s about providing an easier legal pathway to justify refusing entry to a wide range of activists and human rights observers – many who may not even support the BDS campaign but are simply supportive of Palestinian liberty and equality.

“Activists who are determined to visit Israel and Palestine, in order to bear witness to the reality on the ground and engage with Israelis and Palestinians, should try to ensure their social media presence is minimal and that they have legitimate tourism plans to elaborate on at entry points into Israel.”

Even those holding no official position within the blacklisted organisations could be denied entry, as well as mayors and politicians who promote boycotts.

“We have shifted from defence to offence,” said Gilad Erdan, the minister for strategic affairs, according to Haaretz.

“The boycott organisations need to know that the state of Israel will act against them and not allow them to enter its territory to harm its citizens.

“No country would have allowed critics coming to harm the country to entry it.”

Arye Dery, head of the interior ministry which will be responsible for implementing the list, said: “These people are trying to exploit the law and our hospitality to act against Israel and to defame the country. I will act against this by every means.”

Last year, Hugh Lanning, chair of the PSC, became the first British citizen to be refused entry to Israel under the law, and Professor Kemal Hawwash, a British-Palestinian man, was also forced to fly back to the UK.

In June last year, the PSC and its supporters, including War on Want, brought a legal case against the British Government concerning guidance which restricted local councils from pursuing BDS against Israel through their pension schemes.

Campaigners argued people had a right to decide not to profit from human rights abuses, and the High Court ruled the Government had acted unlawfully by seeking to restrict “ethical” boycotts of Israel. 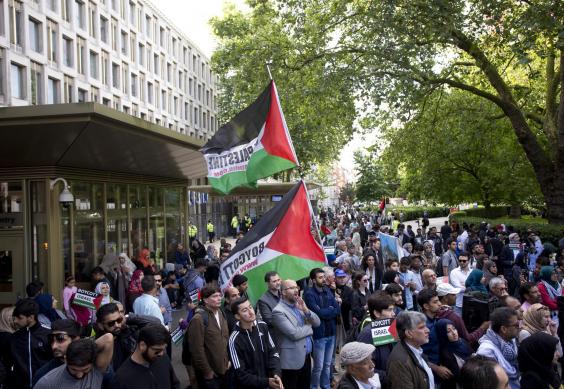 Israel’s Strategic Affairs Ministry has been allocated $36m (£27m) for a plan to combat the BDS movement.

The plan calls for a not-for-profit organisation to be established to counter pressure the movement places on artists and companies to boycott Israel, the Times of Israel reports.

In a statement, the Israeli embassy in London said: “Like all other democracies, Israel will deny entrance to organisations and individuals working to undermine and harm Israel’s national security. The organisations named in the list released yesterday have undertaken ongoing, consistent and significant action to promote and advance a boycott of Israel.”

It said the regulation excludes political criticism of Israel as criteria for an organisation appearing on the list, and added that several other counties had taken steps to counter boycotts against Israel.

Iraqi protesters vow to continue regardless of government offers