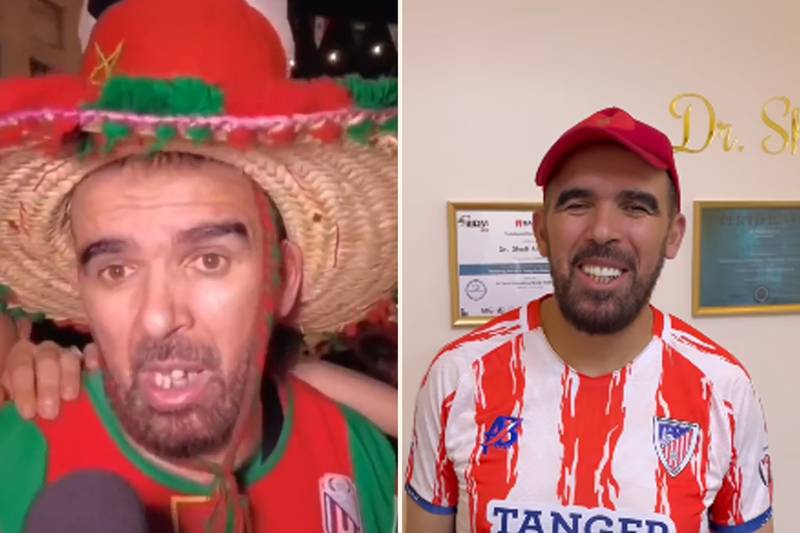 A dentist in Dubai has helped a Moroccan football fan by giving him a full set of dentures after he was bullied at the Qatar World Cup over his “bad smile”.

Dr Shadi Al Shaikh, 39, came to the aid of Mohammed Al Sharafi as social media users made fun of him because of his decaying and crooked teeth.

Mr Al Sharafi, 55, was seen on camera during Morocco’s match against Croatia on November 23, cheering his national team.

Pictures and video of him were shared on social media, leading to personal attacks.

It was then that Dr Al Shaikh, from Jordan, decided to help the fan, who was being trolled mercilessly.

The dentist asked the one million followers on his Instagram page to help him find Mr Al Sharafi.

“I decided to help him as soon as I saw his picture,” Dr Al Shaikh told The National. “I didn’t like how people bullied him because of his teeth. I met him in Qatar and offered him free treatment in my clinic in Dubai.”

Mr Al Sharafi travelled to Dubai with his son on Saturday for treatment. All his expenses, including tickets and procedure fees, were covered. His free treatment will continue for the next six months.

“He was suffering from bone resorption in the upper jaw, causing the destruction of bone tissues,” Dr Al Shaikh said. “This makes it hard to implant new teeth. His six-month treatment will require a bone implant first.”

“He’s had a phobia of dentists all his life,” he said.

For the time being, Mr Al Sharafi has been given dentures to cheer for Morocco in their match against Spain on Tuesday in the knockout stage.

He and his son will travel back to Doha and this time he will have a perfect smile.

Dr Al Shaikh posted a video on Instagram showing the Moroccan fan with his new teeth and wrote: “For the bullies. It’s just the beginning.“

“Being a doctor empowers you to be able to do something for people who are suffering, instead of just watching helplessly,” he said. “As a dentist and a surgeon, I will make him have the most beautiful smile.”