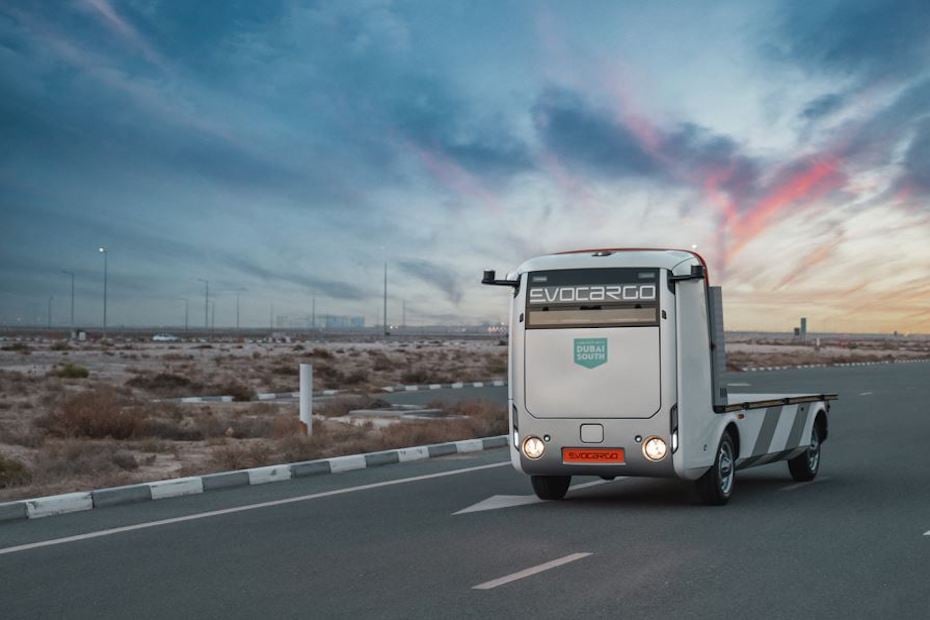 Dubai South, an aviation and logistics urban master developer in the emirate, has signed a preliminary agreement with autonomous logistics company Evocargo to conduct the UAE’s first driverless truck trials as it positions the city to become a hub for the future of transport.

The tests, which will be conducted at the development’s Logistics District, are aimed at helping Dubai-based Evocargo observe its EVO.1 truck and reconfigure it specifically for the Middle East and North Africa region, Dubai Media Office said on Wednesday.

A control centre with a remote operator will be stationed on-site to manage the trucks, check the serviceability of its sensors and identify any issues, it said.

The trials are aimed at “setting new global benchmarks and consolidating the leadership status of the country’s logistics sector”, Mr Ahmad said.

Besides improving operational efficiency, our partnership will help scale supply chain operations and achieve sustainability. At the Logistics District, we are mandated to support the industry and accelerate the UAE’s rapidly advancing logistics sector.”

Competition to offer driverless services as part of the next generation of transport is picking up, as countries race to embrace new technology and adhere to sustainability goals.

The value of the global autonomous vehicle market is forecast to top $1.8 trillion by 2030, from about $94.4 billion in 2021, growing at a compound annual rate of almost 39 per cent, data from Precedence Research shows.

This is close to an earlier estimate from analysts at Swiss bank UBS, which said the market could be worth about $2 trillion a year by 2030.

The UAE has taken several initiatives to implement driverless services on its roads. This is one pillar that makes Abu Dhabi and Dubai “well positioned” to be at the forefront of becoming full-fledged smart cities.

“Dubai’s Roads and Transport Authority launched a competition that challenged engineers to design driverless buses to solve issues facing the city’s public commuters. Last month, the RTA announced a shortlist of 12 finalists, who come from China, France, Taiwan the UK and the US, all vying for the $1 million top prize.

At the Gitex Global in October, Dubai showed off its first driverless taxis, to be “deployed in limited numbers next year”.

The UAE was also ranked eighth in KPMG’s 2020 Autonomous Vehicles Readiness Index, the third year in a row the Emirates was in the top 10, ahead of the UK and Denmark.

The EVO.1 has a lifting capacity of 2,000 kilograms, and can accommodate up to six Euro-pallets moving at 25 kilometres per hour for up to 200 kilometres, the statement said. Charging takes anywhere between 40 minutes to 6 hours, depending on the electrical outlet, for a full day’s operation.

The security system of the EVO.1 platform has four tiers: the computer vision of the space around the vehicle, an automatic diagnostic system, a remote-stop system and a standby pneumatic braking system. Evocargo has 37 protected inventions and technologies.

Evocargo’s operations in Dubai South are also its first venture into autonomous vehicles in “such a global multimodal logistics platform”, and would enable it to grow its footprint in the region and beyond, Mr Bolshakov said.

“This trial is a significant milestone for the company as it unlocks opportunities to expand our products in the strategic Middle Eastern and Asian markets,” he said.

Spanning 145 square kilometres, Dubai South is the emirate’s largest single urban master development, which is being built upon an aviation and logistics ecosystem, complemented by multi-modal air, land and sea transport infrastructure.