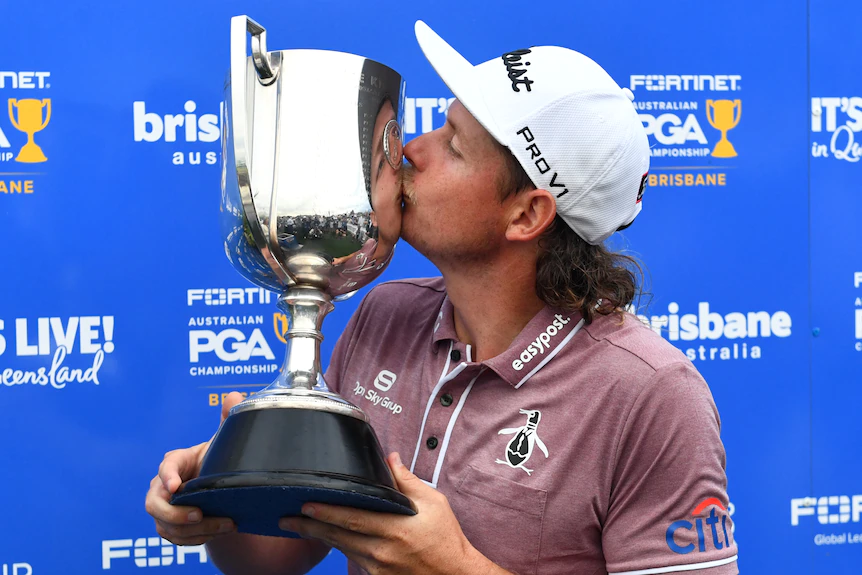 A three-stroke leader at the start of play, Smith was treading water for much of his front nine, turning in one-under and with the advantage reduced by two when play was suspended at 1.25pm local time due to the threat of a storm.

Players returned to the course at 3.10pm but lightning in the area forced them from the course again just eight minutes later.

With rain falling, play resumed for a second time at 4.05pm and two minutes later Smith’s bogey at 11 saw him fall to a tie for the lead with Jason Scrivener and Japan’s Ryo Hisatsune at 11-under.

The tee-shot at 12 was far from convincing but he conjured yet another short game miracle, blasting an explosion shot from the left rough to four feet, his successful birdie putt giving him back the outright lead.

With a softness in the greens absent for the prior 66 holes, Smith’s class came to the fore.

He would not relinquish the lead again, peeling off birdies at 13 and 16 to move three strokes clear as one by one challengers fell by the wayside.

Scrivener will lament a costly double bogey at 17 but the week-long celebrations of Smith’s extraordinary year of winning fabulously touched down on home soil with friends and family by his side, the final margin of victory of three shots back where it was more than seven hours earlier.

It was a Sunday script with more twists than many expected, it’s final act delivering the happy ending thousands of golf fans had been craving.

Winner in 2017 and 2018 at Royal Pines on the Gold Coast, Smith’s third lifting of the Joe Kirkwood Cup sees him join Peter Senior, Robert Allenby, Peter Lonard, Bill Dunk, Kel Nagle, Ossie Pickworth and Norman von Nida as the only players with at least three Australian PGA titles at just 29 years of age.