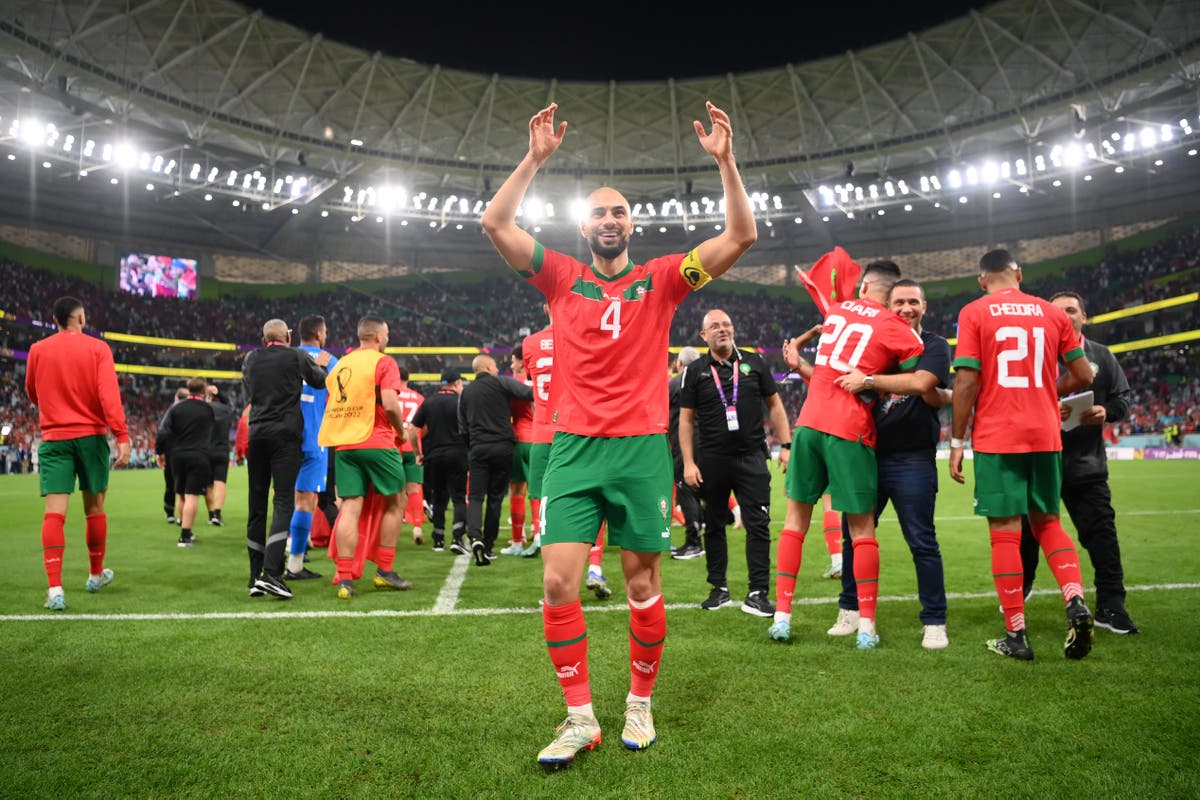 Jubilant Moroccan fans are dreaming of another World Cup miracle as their national side prepares to face defending champions France for a place in the tournament final.

The formidable Atlas Lions have already etched their names in the record books by overcoming international heavyweights Belgium, Spain and Portugal to become the first team from the Arab world to reach the semi-final stage.

They are looking for another ― but not their last ― giant-killing act as they aim to slay France and book a date with destiny in Doha with Lionel Messi’s Argentina.

Morocco can ‘make everyone happy’

Abdelilah El Amrani, a Moroccan fan who travelled to Qatar four days ago, believes his team can upset the odds again.

“It’s like a dream coming true. France is a tough team and they want to defend the title, but Morocco is an organised team in all matches. Morocco will make everyone happy tonight,” he said.

“The coach has put in place brilliant tactics and game strategy by changing the shape of the team. It’s like a miracle.”

He believes Morocco can put Africa and the Arab world on the footballing map by not only overcoming France, but becoming world champions on Sunday.

“We represent Arab and African nations. We want the title to put Africa’s name beside the Europeans and South American nations who have won it.

Dubai resident Hicham Hansali, 48, has also flown to Qatar to soak up the carnival atmosphere.

“It is a legendary time for us. I wanted to play against France from day one of the tournament because they played attack and control the midfield, while our advantage is in the strong line of defence, which will reduce the danger coming from [Kylian] Mbappe,” he said.

“Remember we only conceded one goal in all matches, which is impressive.”

Mohammed Moazim, 33, said Morocco hold no fears for Les Bleus, who are aiming to emulate the achievements of Pele’s heralded Brazil of 1958 and 1962 by retaining the trophy.

“France are the champions and nobody can defeat us. I’m not afraid of Morocco and all eyes are on the final match against Argentina,” Mr Moazim said.

“Morocco is a good team but the champions shouldn’t be worried about any team [they] face in the knockout stage. We will win the title for the third time because we have a strong team.”

Adrien Roux, 34, is less assured of a France victory, but feels Didier Deschamps’ men will reach the showpiece final again.

“It will be a difficult match. Morocco have the strongest defence and great players, but two of their players are out and we have a strong attack and midfield,” he said.

He believes France will face a tough task against an Argentina team backed by tens of thousands of supporters in Qatar if they do get past Morocco.

“We have a couple of thousand French fans here in Qatar while Argentina fans are everywhere,” he said.

Samuel Bakri, 40, feels the resilient Moroccans may push the French superstars all the way.

“Morocco have played very well and I think it will be either 2-2 or 3-3 and France will win on penalties,” he said.

“At the end it will be a strong and beautiful match to enjoy. If Morocco win then it would be good thing to me because they play beautiful soccer and defeated big teams. They play not only defensive as they have their own tactics.”