Home » This couple travels the world full time. Here’s what it costs — and how they pay for it 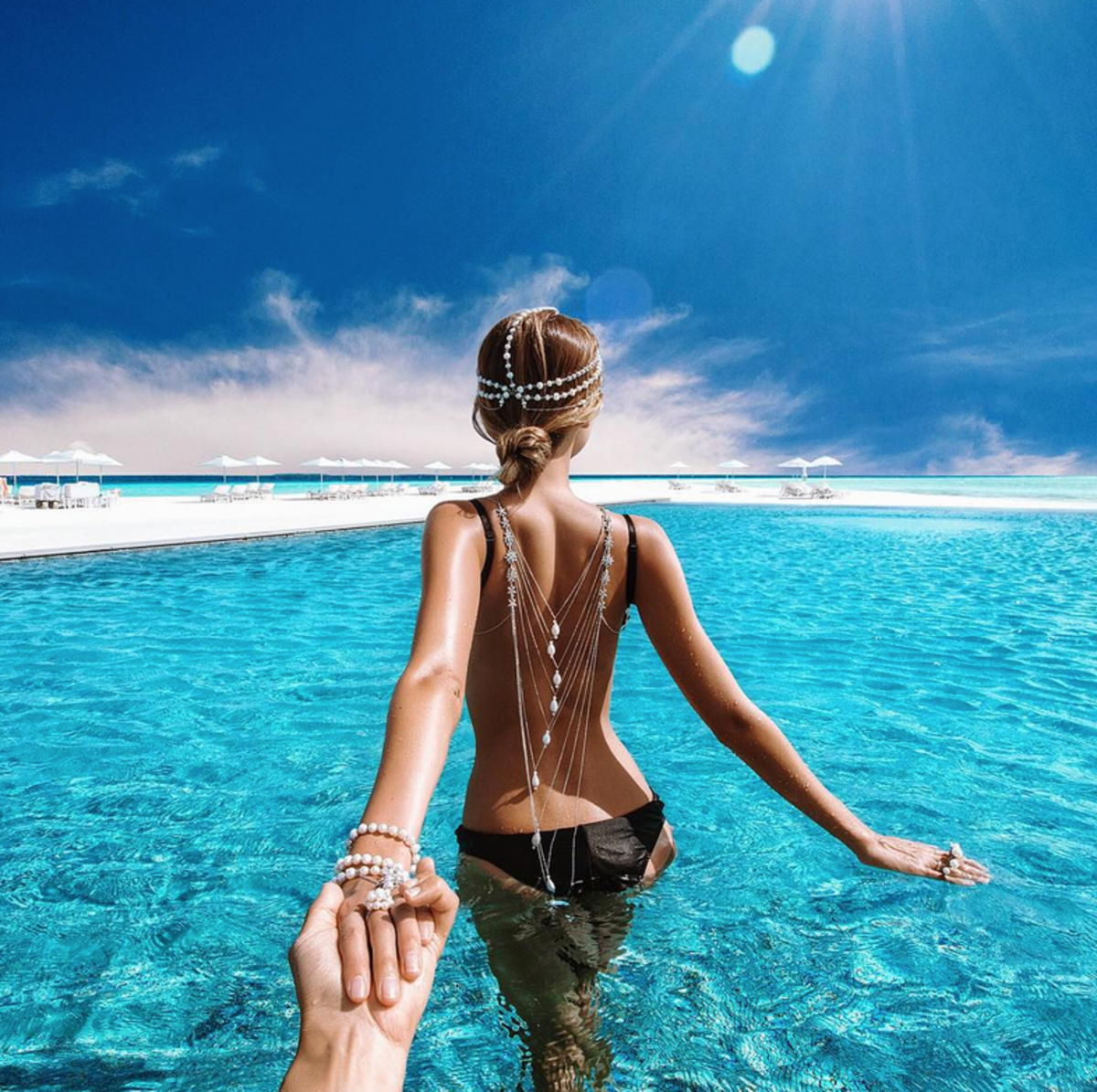 Ernestas Tyminas felt “stuck” in his role as a marketing manager at a newspaper in Colorado Springs, Colorado.

So he requested two months off to backpack through Asia, he said, landing in Beijing in January 2019.

“On the first day … I meet this one,” he said, gesturing to Darina Karpitskaya, sitting by his side.

The couple, speaking to CNBC via video from Dubai, said they met via the travel app Couchsurfing, which links solo travelers together. Karpitskaya, 31, and a flight attendant at the time, had been grounded in Beijing for two days because of mechanical problems with her return flight.

Though more solo travelers agreed to meet that day, Tyminas and Karpitskaya were the only two who showed up.

After one day together, they planned to meet again in Asia one month later.

Karpitskaya returned to Asia, and the couple’s second date was a “crazy one-month adventure” to Singapore, Thailand and the Philippines, said Tyminas, 29.

It was in the Philippines, he said, that he decided he wasn’t going back to his old life.

“We were … laying on the beach under the stars,” he said. “We were kind of starting to dream about this lifestyle.”

After returning to Colorado, Tyminas quit his job, sold his belongings and moved to Europe, he said.

Karpitskaya wasn’t quite there yet, saying, “At first it sounded like: Oh my God, you’re quitting your job. You’re moving from America. Maybe it’s too soon. But at the same time, when I came back from that trip I felt like I’m living a life that I’m not enjoying.”

A dog in tow

Tyminas flew from Denver to Paris with his dog — an 82-pound Borzoi, once known as the “Russian Wolfhound,” named Cosmo, who is over 6 feet tall on his hind legs.

“They gave me three rows of seats, and the dog was just laying on the floor,” he said.

From there, the couple traveled often — to places like Italy and Iceland — but not yet full time, they said.

Then Karpitskaya got what she called her “dream job” — a position with Emirates airline. She moved to Dubai, but the couple continued to meet and travel together.

Then Covid hit, and Karpitskaya accepted four months of unpaid leave from her job.

“We said: We have four months — we can go explore whatever is open,” said Tyminas.

The trio — including Cosmo, who traveled in a huge bed in the back of their SUV — traveled first to Croatia, then slowly across much of Europe, including many former Soviet states, said Karpitskaya.

She never returned to her job, and couple have been traveling ever since, she said.

What it costs to travel the world

In the beginning, they spent between $1,000 and $2,000 a month — all from savings — by staying in cheap accommodations, cooking at home and seeking out free activities, said Tyminas.

But the work was cumbersome, and it “felt like I still had a job,” he said.

So the couple decided to open a marketing and graphic design company, despite the fact that “we didn’t know a lot,” said Tyminas.

They reached out to thousands of people, they said, often working late into the night. Potential customers would ask, “Can you design book covers?” “Can you promote music?” Tyminas said his response was always the same, “Of course I can.”

In reality, he was learning on the job, he said, relying on YouTube, Google and online research. But clients were very happy, he said.

“They paid me half of what they would pay other marketing agencies and the results, they said, were better than they had before,” said Tyminas.

In the first month, the couple made $6,000, he said. Now, sometimes they earn several thousand dollars in a day working with real estate companies and music labels, he added.

“We write blogs for people — we do everything,” said Tyminas. Plus “we don’t have to report to anybody. We’re our own bosses.”

In the past six months, the couple said they spent an average of $4,000 a month. More than half goes to accommodations, which vary by location — from $3,100 per month in Dubai to $1,500 in Lisbon, Portugal, they said. They limit stays in expensive locations, like Switzerland, to no more than a week, they said.

One way to save money is booking monthlong stays on Airbnb, which cuts down average nightly rates and reduces service and cleaning fees, said Tyminas. But even when they bounced from place to place to visit Europe’s Christmas markets last year, they still ended up paying about $2,500 that month, he said.

Karpitskaya said she doesn’t want these costs to scare people because they spent far less in the beginning. At the time, they spent about 80-100% of their income, but now Tyminas said “we spend about 30% and … save the rest.”

The couple told CNBC they still travel modestly — no five-star hotels — and they still cook most meals at home. But they spend more on activities that they film for their YouTube channel Dream Team Travels — another “completely self-taught” venture, they said.

Hiccups on the road

A life of constant travel isn’t all fun and games, they said.

They encounter dirty Airbnbs and hosts who cancel reservations at the last minute. They’ve also had their camera equipment and clothing stolen twice — once in Mexico, and more recently in France — plus an attempted theft of their belongings from their car in Barcelona, while they were sitting in it.

They have also thought about settling down when they find a place they really love, such as the beaches of Portugal or the French Riviera, said Tyminas.

“But then … we drive somewhere else and we’re like this place is also just as good,” he said.

When Russia invaded Ukraine, quickly occupying the Kherson region where Karpitskaya’s parents live, Tyminas emailed CNBC to say that they’d stopped traveling for the time being.

“The first few weeks we didn’t even leave our apartment,” he said. “We spent a lot of time arranging transportation for civilians as well as many dogs from shelters to be taken out of dangerous regions for adoption in Europe.”

By the summer, they had resumed traveling, but were still helping to evacuate Karpitskaya’s family.

“Just a week ago we were able to finally get Darina’s parents out of Ukraine,” said Tyminas, adding that they are currently in his family’s home in Lithuania. “We also did a trip to Romania to pick up Darina’s sister and her five-month-old baby from the border and took her to live in Germany.”

The couple are now in Malaysia, they said, and plan to explore Southeast Asia for the next two months.