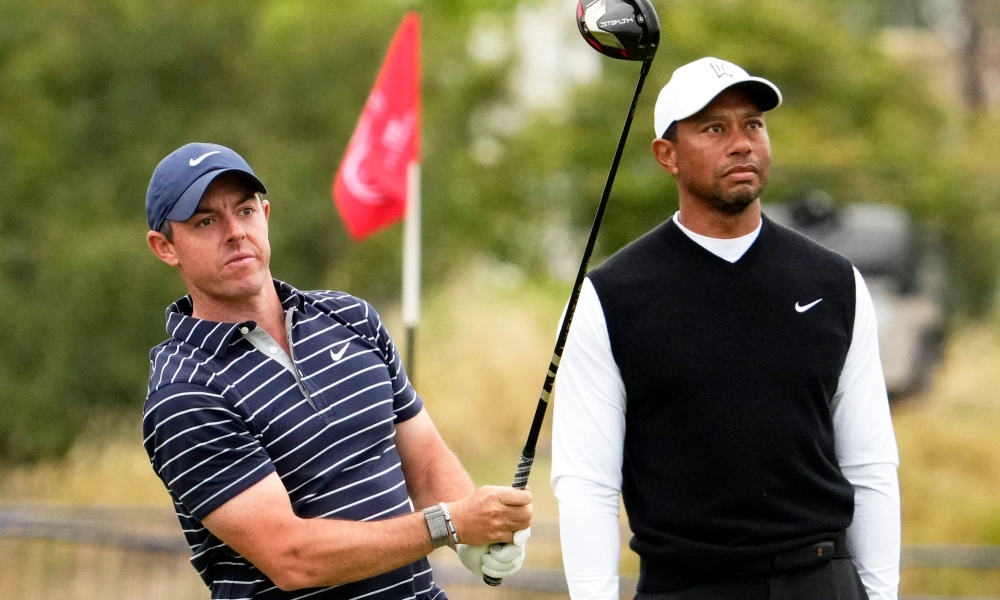 With the golfing year moving into what has become ‘Tiger season’, Woods will once again energise what would otherwise be one of the least significant periods of the calendar.

Soon to be 47 years old, Woods’ influence will be keenly felt over coming weeks. Tournament titles will be of minimal significance, but he brings eyeballs and much needed direction for a sport mired in civil war.

Woods hosts this week’s Hero Challenge in the Bahamas, playing competitively for the first time since missing the cut at the The Open in July.

He also partners Rory McIlroy in ‘The Match’ on 10 December, before competing alongside his son Charlie in the PNC Championship in Florida.

Woods’ presence in all three competitions will attract audiences far greater than if the 15-times major champion was not playing.

More significantly, this period will not be wasted in the fight to find a solution to the existential crisis prompted by the arrival of the breakaway LIV Tour.

The Match is a mic’d up hit and giggle event in which Woods and McIlroy take on Jordan Spieth and reigning US PGA Championship winner Justin Thomas. The Florida contest will also prove a significant talking shop.

The players involved are deemed the most influential in the sport. They were the top four earners from the PGA Tour’s Player Impact Programme – Woods led the list and pocketed $15m (£12.4m) despite playing only three tournaments last season.

Furthermore, leading administrators from both sides of the Atlantic Ocean will use the fund-raising event at the Pelican Golf Club to discuss next moves following the arrival of the lucrative Saudi Arabia funded LIV set-up.

One source agreed that it could amount to a “council of war”, with the likes of PGA Tour commissioner Jay Monahan, DP World Tour boss Keith Pelley and R&A chief executive Martin Slumbers all scheduled to be in Florida at the same time.

World number one McIlroy has been the most vocal player in standing up for the established circuit during a year of unprecedented rancour, while Woods heavily criticised the LIV project at the 150th Open Championship.

In August he flew to Delaware in the week of the BMW Championship to join a 23-strong players’ meeting which also involved McIlroy, Thomas and Spieth.

That gathering has already prompted massive increases in PGA Tour prize funds, with 11 events worth at least $20m next year. More radical changes are promised for the 2024 season on both the American circuit and the European-based DP World Tour.

But golf’s future remains very uncertain and there will be more on the agenda than just raising money for the Hurricane Ian relief fund when the competitors and administrators gather for The Match.

Before that comes the 20-man $3.5m Hero Challenge, where the form of Woods – now ranked 1,277 in the world – will prompt its usual level of fascination.

How much has his right leg, so badly damaged in his February 2021 car crash, improved since he hobbled around the Old Course in the summer?

How realistic is it that we will see the former world number one as more than an exhibition golfer going forward? Certainly his influence these days is far greater off, rather than on, the golf course.

It is uncomfortable that this limited field, no cut tournament attracts world ranking points.

Yes, there is a stipulation that its make up – apart from the host – has to be drawn from the world’s top 50. But, despite big names, has such a small event ever been worthy of official recognition?

Yes the players are competing, but they also treat the week as an end of season semi-vacation, a low stress reward for higher pressure successes earlier in the year.

It is even more inconvenient now that LIV, with its 48-man, 54 holes, no cut formats are demanding world rankings currency. They might have a point – and some would argue should have official points – especially when the Woods event qualifies.

Nevertheless it is an excellent gathering in the Bahamas this week, with Masters winner Scottie Scheffler, Thomas and England’s US Open champion Matt Fitzpatrick all competing.

The 29-year-old Queenslander reminded us of his qualities again last weekend with a brilliant victory at the Australian PGA in Brisbane, his fifth win of a stellar year. He is a remarkable talent, arguably the best in the world.

It would be lovely to be sure of that being the case, but in the current climate it is impossible to know because we cannot calculate the worth of performances on the LIV Tour.

And with indefinite suspensions in place on the PGA Tour for LIV rebels, world number three Smith will not be able to defend the Tournament of Champions in Hawaii at the start of next year, or the PGA Tour’s flagship Players Championship at Sawgrass in March.

Whatever the arguments around LIV, it is not good for the men’s game that such a talent is absent from such occasions. This could concentrate minds when the most influential figures in the sport get together during ‘Tiger season’.

It coincides with the men’s game stumped in controversy. The fractures and fissures threaten to dilute a model massively enhanced by Woods’ greatness as a golfer.

His enduring influence is why the coming weeks might prove significant to the future of the game.